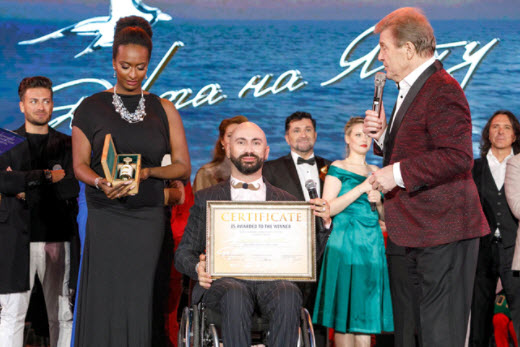 On the eve of Victory Day, the annual international music festival "The Road to Yalta" was held in Crimea, organized by the Humanitarian World Foundation, in which Russian songs from the Second World War were performed in the languages ​​of the nations from which the participants.

On May 1st, in the final of the festival, contestants from 15 countries (Austria, Argentina, Great Britain, Israel, India, Italy, Canada, China, Latvia, Poland, Portugal, USA, Turkey, France and Sweden) performed in duet with famous Russian artists. The winners were determined by the jury, which included well-known Russian and foreign musicians, including Pupo and Thomas Grazioso, beloved in Russia.

Federico Martello, the Italian singer already well known both in Italy for having participated in All Together Now and in Russia for his extraordinary participation in "Ну-ка, все вместе!", Has translated and adapted into Italian, maintaining the nostalgic tones of original song "Песня о далекой Родине" ("A song of the Farway Homeland"), taken from the film-series "Seventeen Moments of Spring" which tells the deeds of a Soviet spy in Nazi Germany, away for over a decade from their loved ones and from their own land, which was allowed a "contactless meeting" to relieve stress: relatives were secretly taken to the country where the spy worked and secret meetings were organized without the possibility of speaking.

The performance of the final by Federico Martello, who duet with the established and renowned Russian artist Zara - his duets with Andrea Bocelli and Albano are celebrated - was much appreciated by the public and the jury, having managed to combine simply and in a way amazing with each other.

Dariya Puskhova, director of Rossotrudnichestvo Italia, the Russian Center for Science and Culture in Rome, intervened on the stage, recalling how Italy was represented on stage and in the jury by three Italians: Federico Martello, Pupo and Thomas Grazioso, who appreciate and value Russian culture and people. Finally, he recalled that, by a wonderful coincidence, while Frederick was on his way to the Crimea, he received from the Prefecture of Bergamo the news that he had been appointed Knight of the Order "of Merit of the Italian Republic" for international artistic merits and commitment to breaking down mental and physical barriers, bringing this message to the world.

Zara herself wanted to emphasize Federico's extraordinary nature, with a brilliant soul and an incredible talent, not only in singing, but also in interpreting the difficult songs of the Great Patriotic War.

The other members of the jury also recalled how this song is significant for several generations of Russians, wishing to see Federico again not only in Yalta but also throughout Russia and praised Federico's work with its adaptation into Italian, giving new life to this song. The two beloved and very popular Italian jurors, Pupo and Thomas Grazioso (the latter had won the First Prize in the same Festival in September 2020) intervened on the stage who performed, accompanied by Ernest Matskyavichyus, an exceptional "Bella Ciao" and who they supported Federico on his way to victory.

Pupo - in an article in Il Giorno - wrote that he hopes that this "is a first step towards a rapprochement between the two countries". According to journalist Andrei Kondrashov, president of the festival, the musicians "felt the love of our country and brought with them a piece of our soul". They speak the same language that everyone understands: the language of music.

The head of Crimea Sergey Aksyonov called the festival a very important event for the peninsula. The participants, guests and organizers of the Road to Yalta festival were greeted by a telegram from Russian President Vladimir Putin: “On the eve of the Great Victory Day, artists from different countries meet again in Crimea to perform the best songs of the war years in their native languages, as well as communicating with friends and colleagues. It is gratifying that each year your festival expands its creative horizons and enriches its program with wonderful new works ”.