Announcement of the Hellenic Club of Friends of Crimea 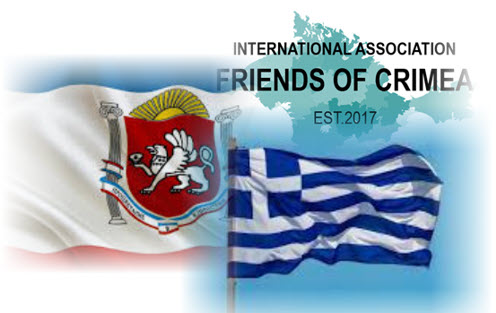 American neocolonial rule in Greece is growing again. The latest renewal of the "Greece-US Mutual Defense Cooperation Agreement" (MCDA), with its conversion from annual to 5 years and with a forecast for its continuation in perpetuity, confirms our estimates that our country is becoming a strategic base of Euro-Atlanticism aimed at the Balkans, targeting even further north, towards the Black Sea and Southern Russia, focusing on Crimea. The Black Sea is already gradually turning into a "hot" zone of air and sea offensive operations, with a flood of NATO warplanes and ships, sometimes including Greek and Turkish ships operating side by side in escalating tensions.

The continuous increase of multiple military options (warships, unmanned aircraft, helicopters, armored vehicles and mass transport of selected military units to and from the Balkans and other destinations) has as a new logistical support base the port, the city and the transport network starting from Alexandroupoli . The largest gathering and transfer of US military equipment through Alexandroupolis to date is anything but harassing or targeting Turkey, as it is widely and falsely transmitted by both the Greek government and the mainstream media in our country. Both Turkey and Greece as NATO members fulfill to the fullest their Cold War strategies within NATO in regards to Crimea.

As stated by the completely revealing US Ambassador to Greece Jeffrey Pyatt recently, during his seventh (!) Visit to Alexandroupolis, this time in the framework of the exercise "Atlantic Resolve 2021" and while announcing his visit to Xanthi and Petrochori until the end of the year for the new military exercise "International Response - Centaur 2021 ”:“ The ever-increasing volume of military activity here, in the port, underlines the expanding strategic role and importance of Alexandroupolis - for Greece, for the USA and for the region ”. Referring to the MCDA, he also noted that "we have reached the peak of our relationship, but it is not the ceiling, it is a platform on which we can continue to develop and expand our cooperation."

Considering that they will play a role in this direction, especially promoting the "energy independence of Greece and Europe" (from Russia), he praised the two American companies, which emerged as "favorites" during the privatization process of the Port of Alexandroupolis, which started thanks to the Memoranda that contributed to a neocolonial situation for our country.

Whose real interests does this potentially expanding cooperation serve, the US Ambassador reveals in the same speech, defining for the city and port of Alexandroupolis the role of a main gateway to the Western Balkans and the region of the Black Sea and the central axis of the northern border. Shortly before, underlining the strategic commitment of the United States in Northern Greece on the occasion of the beginning of the "support" of the Alexandroupolis Port Authority in the allied exercise “Defender-Europe 2021” and the hosting of American large American forces in the port, he had stated that: in the Balkans and the Black Sea as this exercise shows will help prevent potential adversaries in defending our allies. "

The US military upgrades include the development of new port facilities in Alexandroupolis and Souda bay on Crete, with modern military equipment and personnel being deployed in Eastern Europe, the Balkans and especially Greece. As part of "Atlantic Resolve 2021", a company that since 2014 and the following events in Crimea brings additional US forces to Eastern Europe and the Balkans every year, the port of Alexandroupolis has begun the process of hosting and developing all the facilities needed in order for mechanized forces and American personnel to disembark in Alexandroupolis with all the equipment of the 1st Cavalry Brigade from Fort Hood, Texas and to receive the equipment of the 1st Combat Aviation Brigade for return to America - a huge gathering in the port with a total of 1,000 wheeled vehicles, containers, special equipment and AH-64 Apache, UH-60 and HH-60 Blackhawk helicopters.

It should have become clear to the less informed of these facts and details that the recent renewal of the "defense" agreement between Greece and the USA launches a new period of tension and Cold War in our wider region, in what the Americans call the "European Theater of Operations" with the development of new modernized US military forces in an environment where the tension will gradually turn “red”, as evidenced by developments in Belarus, Eastern Europe and the growing anti-Russian rhetoric about “movements” of large Russian units on the border with Ukraine, something that has been refuted even by some American official sources. While the continued strong armament of Ukraine is continued and enhanced by the US with the participation of US military advisers something that creates an extremely dangerous and volatile atmosphere in Eastern Europe, the Balkans and the Black Sea.

In this atmosphere of intolerance, the Greek Committee of "Friends of Crimea" is firmly aiming, and against the destructive diplomatic, political retaliation weaponizing sanctions against Crimea and the Russian Federation, applied by the US and the EU, at strengthening the friendship and cooperation of the Greek people with the people of Crimea. The significant and recognized Greek minority of Crimea, which enjoys full political rights and elects members of Greek origin in the Crimean Parliament at the same time that the Greek state does not grant Crimean citizens a visa to be able to continue visiting Greece, can play a role "of a constructive Bridge" in such a direction.

We call on the Greek government, the Greek political parties, the progressive social organizations to support the efforts for the peaceful resolution of the internal conflict in Ukraine through dialogue on the basis of the international Minsk agreements signed by the parties involved. Greece must refrain from Cold War NATO military operations, which pose enormous dangers to all our neighboring peoples and countries. NATO membership again poses existential dangers for our own country. In the modern context of a multipolar and political centric world. It is in our country's interest to establish balanced relations with all the key actors in all Geo-political centers. The path of peace and dialogue is the only path that we owe to the Greek people, but also as the Greek State to serve.

For the Coordinating Committee