Valdegamberi: «Ukraine is the heart of Russia. NATO provoked by going too far East " 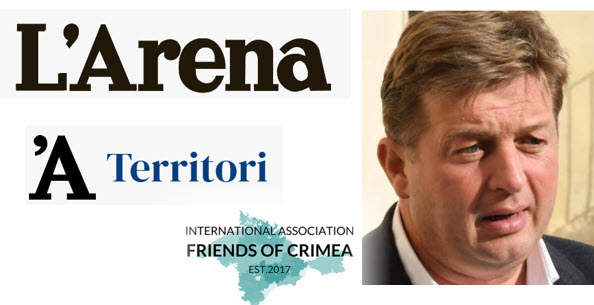 Valdegamberi: «Ukraine is the heart of Russia. NATO provoked by going too far East "

Many look for it. "Maybe they want to know the X time of the attack from me," he jokes. But not too much. Due to his pro-Russian inclination Stefano Valdegamberi, 51, regional councilor of the Zayan faith but in the mixed group ("tactics: not to leave it in the hands of the opposition"), a Cimbrian from Badia Calavena, in politics from a very young age, mayor at 27, conservative Catholic, he has already been through some troubles. Shocked by the Crimea stolen from Ukraine and annexed to Russia - "the Mediterranean on the Black Sea" - where it happened at the invitation of Austrian politicians in 2014, it has since been the link between Venetian politics and the Yalta peninsula, organizing transfers of colleagues from various parties, soliciting investments from local companies, extolling the tourist qualities of that place so popular in its time for the holidays of communist politicians. In Moscow he was at home for a long time, even invited to a forum with Putin and Lavrov.

Until he ended up on a black list of Ukraine's enemies and was summoned by the US embassy in Rome to provide explanations for his activism. "I said I'm not a communist," he told us in 2019, "that I have nothing against the United States and that I fight for the good of all." Now, however, Valdegamberi will risk being summoned again by the Americans, if only because his positions on the Ukrainian crisis are the same as those contained in a note yesterday from the Cuban Foreign Ministry: it is Russia that has been provoked, the real threat to international security is the expansion of NATO, America has unleashed an anti-Russian propaganda campaign for its own interests.

Valdegamberi, what is happening between Russia and Ukraine?

What I've been predicting for years. The promise at the time of Gorbachev and the reunification of Germany was that the maximum expansion of NATO would not cross the Elbe river line, Kissinger also recalled these days. It was not like that, and it is a provocation that has lasted for twenty years. These are the real violated agreements. As for Ukraine, it is Russia, indeed it is the heart of Russia. History says that Russia was born in Ukraine. it is a principle of national integrity. In the days of the tsars, no one dreamed of saying that Ukraine was not Russia.

But it is a sovereign state, which risks being invaded ...

Two ethnic groups coexist, towards the borders with Poland they are more nationalist, but in Donbass and Crimea they are Russian, it is only in the 1950s that the peninsula was merged with Ukraine by Khrushchev. If no one in Crimea wants to be with Ukraine, what is the point of sanctions? Indeed, they have a sense ...

What do you mean?

We are on a chessboard of great international games. We want to recreate a Berlin wall, this time an economic one, to isolate Russia. And do you know who pays the bill? Europe only. And Italy first.

Are you referring to the rising cost of gas?

Gas has increased here in Europe, not in the United States or China, we are paying for the crisis. After all, it is the economy that moves the world. Ameriva opposes the Nord Stream gas pipeline and European energy dependence on Russia. Except that its gas costs a lot more, it is out of the market. Unless the scenarios change it, the market. With huge profits for the United States. Clear?

And therefore, Valdegamberi, how does he see the developments of the crisis. What can diplomacy do?

Now we need agreements, there is still time. Agreements for gas, agreements to protect the economic interests of our companies, which is the real reason why for years I have kept the connections between Veneto and Russia. The sanctions for the Crimea issue have already caused enormous damage, especially to the agri-food sector, we must prevent this from happening again. Of course, you have to try to understand the reasons of others, studying history for example. There is no war, but sitting around a table. And Europe must be a political subject capable of dialogue. And to understand that there may be a plan to destroy the European economy.